I was walking through my hallway, phone rang, answered it… it was Cam (who was driving from school to work). We began to chat, the norm. Until I looked down at my needing-to-be-vacuumed carpet… was that hair?

When was the last time I trimmed my bangs?
Didn’t I take the bathroom garbage out just yesterday?
Wait… that’s too light to be my– OH no…

That’s when I looked up to the table, at my three-year-old eating her macaroni and cheese. Cameron kept asking what was wrong, because I was silent except for the “OH no…”

The inevitable thing that happens to every little girl at some point in her life… had happened to mine. I had been so careful and always taught her not to do it… apparently I wasn’t clear enough.

Two inches across on the front of Liv’s head had been cut to eye level.

It was time for a haircut. 😦

Here are our sad (but CUTE) before and afters…

(Notice the chipper happiness…
this is before she discovered how much I had to cut off.
She’s turned to look at her “funny” side in the medicine cabinet mirror.) 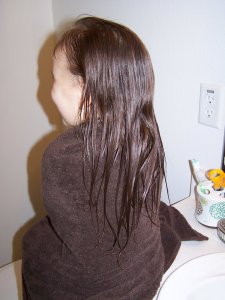 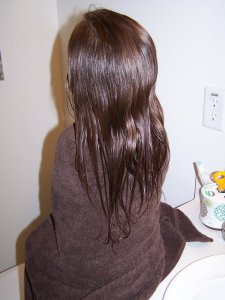 And here she is… looks like she’s 5-years-old now! 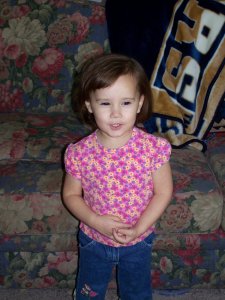 She was watching Cinderella… not paying much attention.
When she started bawling in the bathroom,
because “I was just making it longer, momma…” and
“But I like it longer, I want it longer, don’t cut it,”
it absolutely broke my heart…

(After reminding her, she’d look like Snow White when we were done,
and of course – that she could have fruit snacks… well, things brightened up.) 🙂 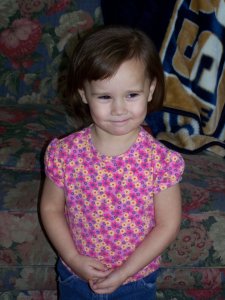 And minus the not paying attention she was suddenly happy again, lol. 🙂 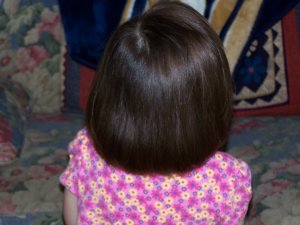 So there you have it folks…

(and oddly enough, EXACTLY like my sister Sidney
when her hair was bobbed, lol.)

At least she’s cute – man, that phrase saves her every day… 😛