We went to a Halloween Trunk or Treat last night with Angela & Curtis at their ward. Zachary (their son), and Christina (Cam’s sister) and her kids: Jordan, Alissa, and Ashlinn, plus Danine (Cam’s mom) were all there as well. 🙂 It was fun! First was the carnival, then the trunk or treat, and I was excited that we got to do one this year and that it was ON Halloween! The kids are excited to trek some neighborhood turf this year. 🙂

Anyway, yes – I have photos… but – let’s not get ahead of ourselves! I need to get some other Halloween stuff up first and I need to stay on the ball or I’ll be posting about Halloween long after it’s over!

So, without further adieu… here’s the beginning of the Halloween String. 🙂

On Sunday – while still horribly sick, I will say, we all managed to look fairly good! ha – we carved our pumpkins together. This year, after suffering through TWO pumpkins (thank HEAVENS Cam stepped in for Dunc’s last year, thought my arm was going to fall off) and due to lack of desirable pumpkins available – we team pumpkin-ed. The girls and the boys. 🙂 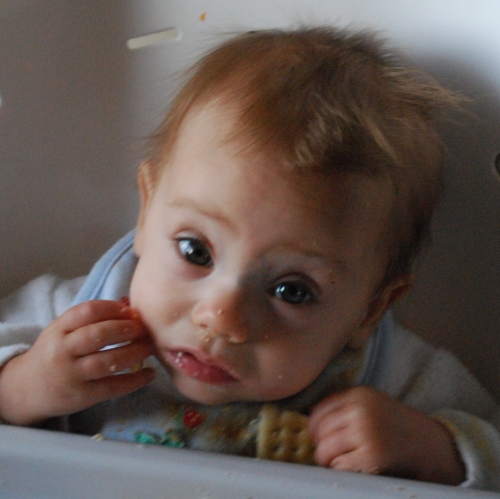 Rae’s highchair padding was in the wash and had just come clean before we did pumpkins. I’m glad I decided to not put it on yet – there’s already an orange flick of pumpkin innards above her head and the cracker she was nursing? That kid can sure make a mess. 🙂 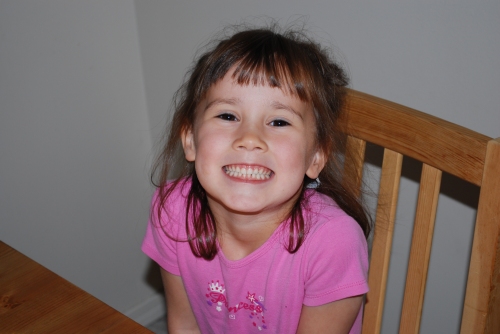 Okay, so we didn’t look bad but I guess hair could have used a little help… 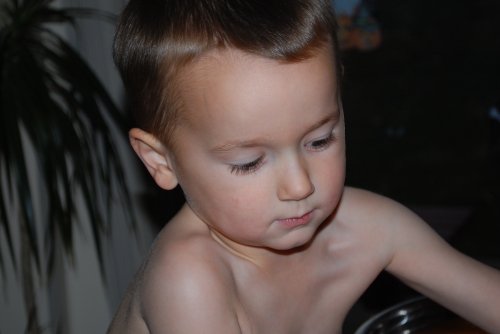 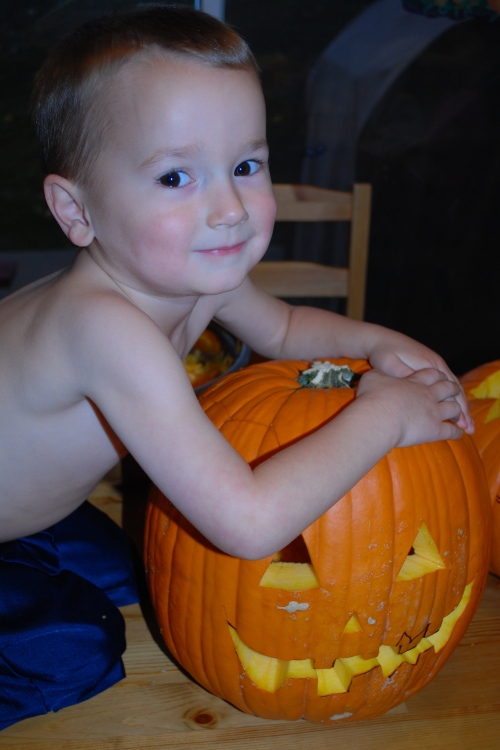 The boys’ pumpkin (and evidence of Dunc’s indecisiveness).

Carve grapefruits and pomegranates for all I care – BRING ON THE CRACKERS, Daddy! 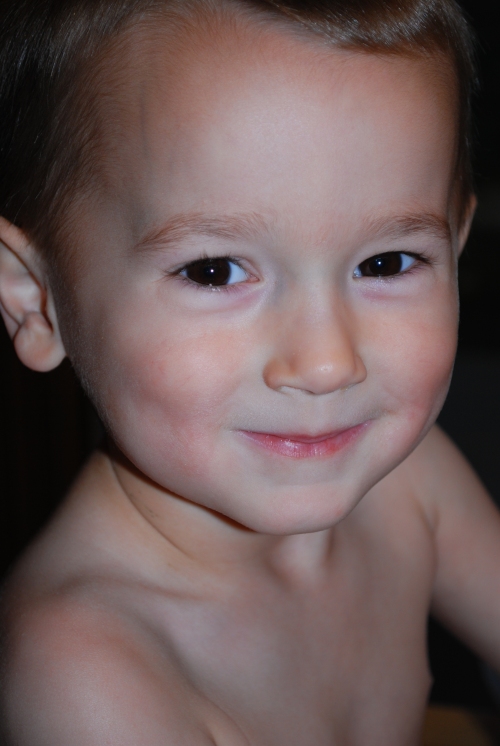 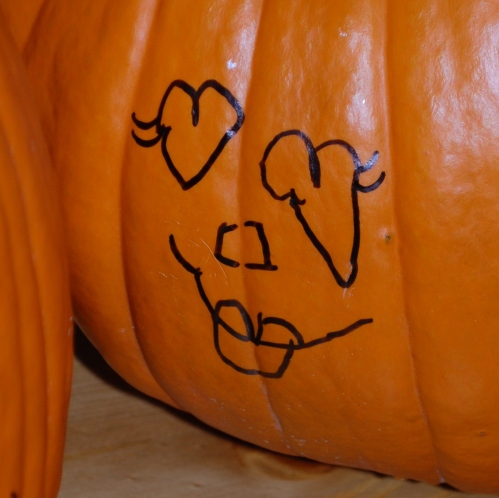 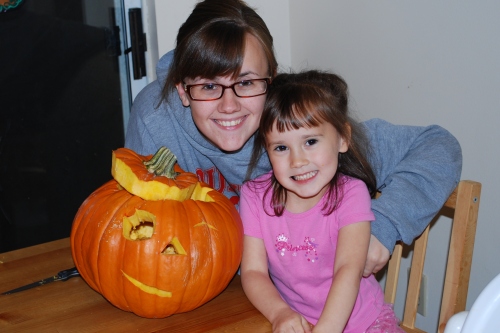 She was happy with ours though. 🙂

You can’t see if very well in this photo, but we carved our girl pumkpin in the true “Cole” fashion, utilizing the personality of the pumpkin and made a pumpkin pirate. 🙂 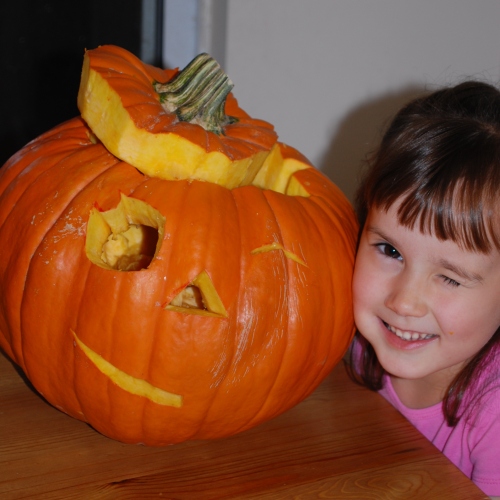 Little bit of a better shot, with matching girl pirate. 🙂 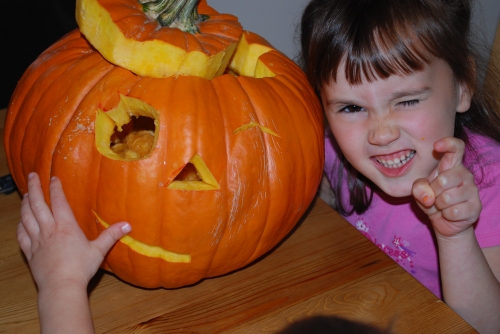 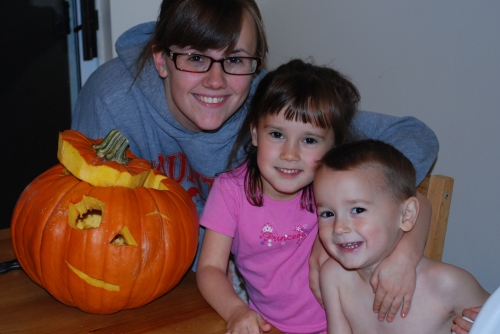 Daddy didn’t get Rae in the shot… one more try… 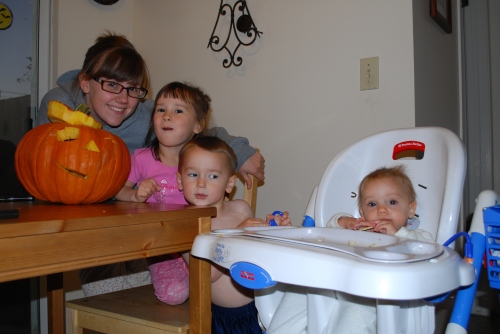 Little silly, but with 4 smiles involved, meh. I’m over it.

(Yes, I know my husband is nowhere to be seen in these photos… don’t have to tell me twice. I did snag a few of him at the Halloween Party though.) 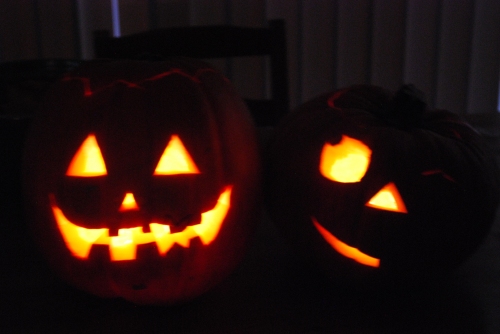