I KNOW. Don’t die of shock. A BLOG POST. I thought I would share with you what I’ve been cooking up during my absence from the blog – none other than our Lego Indiana Jones birthday party!  Obviously all of our games, snacks, and etc. were based at a level of enjoyment for a 4-year-old! We did have a few older kids attending though (the oldest was 7) and fun was had by all.

Here’s Duncan’s 4th Birthday Party! Cameron took the photos for me as I was a little occupied with all the kids and Rae with her whining. We didn’t plan nap time out too well, poor girl. 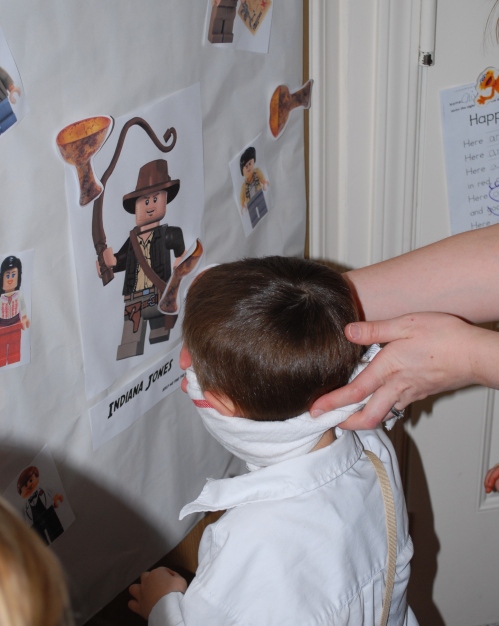 For one of our party games we played Pin the Holy Grail on Indiana Jones. 🙂 I found Lego Indiana Jones characters online and printed them out in varying sizes. Of course Indiana Jones was the largest and in the middle. I opted to try to use something I already had for the background, I could have run to Dollar Tree and picked up a poster board but there was enough going on already! I used Christmas wrapping paper, flipped it over, and folded over each edge for a nice straight-edged rectangle and no one knew the wiser! The birthday boy loved this poster so much he had it in his room for long past his birthday celebration. Duncan wouldn’t keep the blindfold, read clean dish towel, on so I held it on his head so that he couldn’t see. Sound familiar, Mom & Dad? 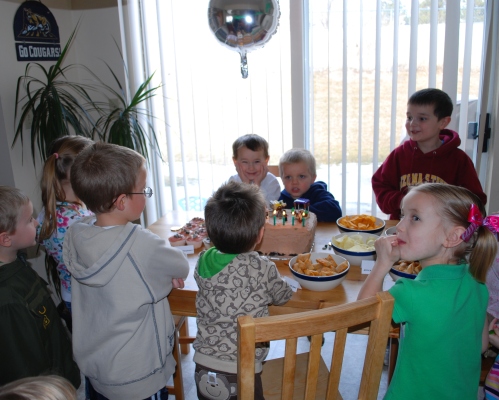 We had different stations set up in the downstairs. The coffee table was Indy’s desk at the College, the kitchen table was Marion’s Place and home to refreshments and goodies, the in-between areas were deemed the jungle with green “vine” streamers, etc. If Duncan would have had a summer birthday I would have continued these stations to the outside where the guests, the boys especially, could enjoy another (dirtier) station. But as it goes with February birthdays, especially those in Utah, this wasn’t very plausible.

Here is a photo of Duncan and his friends and cousins around “Marion’s Place” – home of the cake! Unfortunately, this is the only photo of our cake that I got. Part of being so busy with all the little ones ready for games is not being able to take as many photos as you’d like! It was a simple double layer chocolate cake (box mix) with sand-colored frosting and chocolate rocks. Behind the four basic candles was Duncan’s favorite thing – the brand new Indiana Jones Lego set he had been coveting. It was all set up as the scene would be, Marion and her frying pan included. This was his FIRST set of regular sized (not Duplo) Legos. He fell in love immediately. 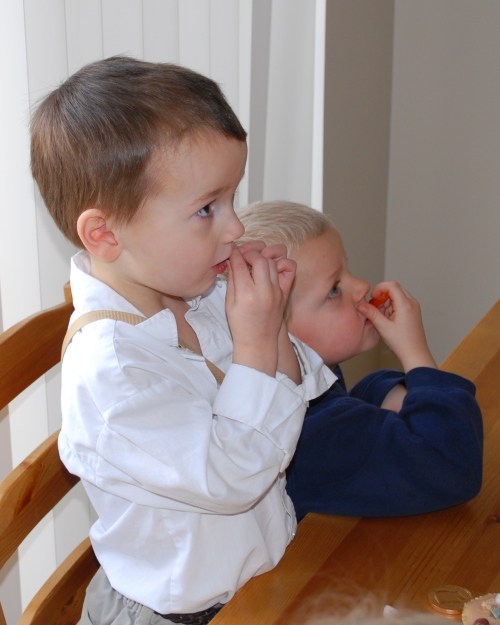 Duncan prepared for the birthday party by dressing up as Indiana Jones himself. Khakis he normally wears for church, a white dress shirt rolled up at the sleeves and unbuttoned (not too far, ha), braided leather belt, and a bear-shaped satchel. His Indiana Jones fedora I found online at a costume shop for around $7-8. He LOVES his fedora.

Here is a photo of Duncan and his friend Garrett, from across the street in our complex. He and his brother Payton are a couple of Duncan’s favorite friends! 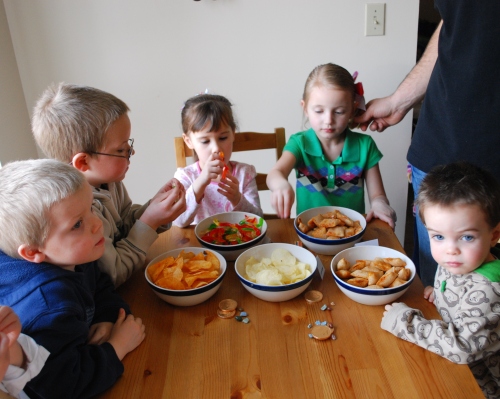 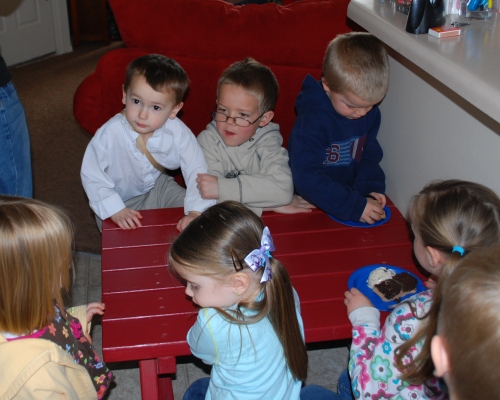 We brought the kids’ picnic table in, that Cameron made, for extra seating. 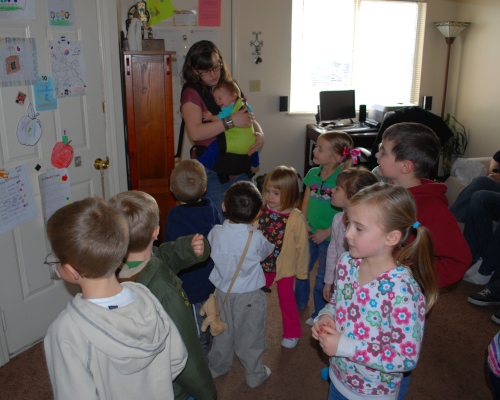 Scavenger Hunt time! (My Boba baby carrier was a life-saver with Rachael. Unfortunately, nap time was nap time and with all the kiddos running around chit-chatting even my carrier couldn’t put her to sleep! It did help to comfort her though, we love our Boba!) 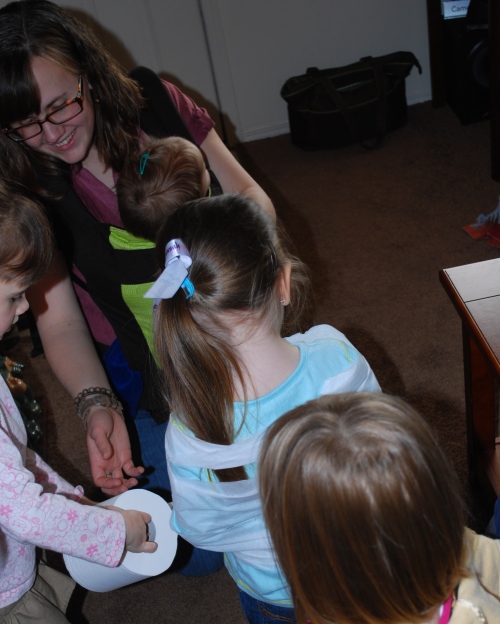 For part of our scavenger hunt, we made mummies out of two of the party guests. So simple, so fun, and all materials are in your house already… guaranteed! 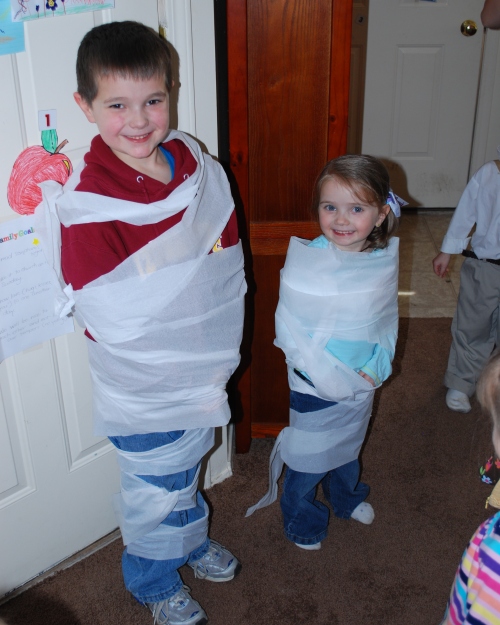 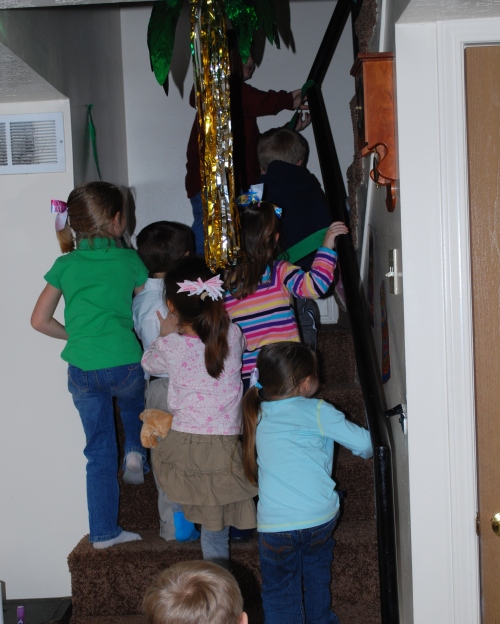 The second clue took them into the jungle (on our stairs) to find more clues to piece together. In addition to all the “vine” streamers around the family room, I had taped streamers from the wall to the stairwell and so forth to create a jungle passageway that they’d have to make their way through to get to their next clue. The whole Luau themed party decorations section at Dollar Tree was perfect for this party. We taped up Tiki Faces through the jungle passageway as well, the kids thought they were hilarious! 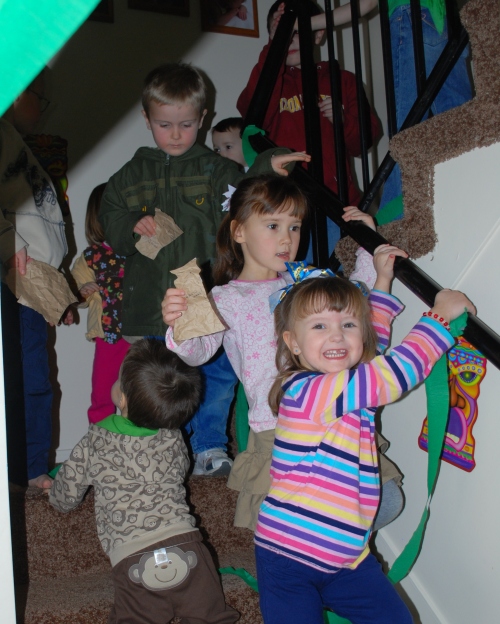 This photo cracks me up, the kids found clues and headed back downstairs to bring them to me – I just love my niece’s (Lissie) face in this, what a cutie! I made her SpongeBob bows that she’s wearing. 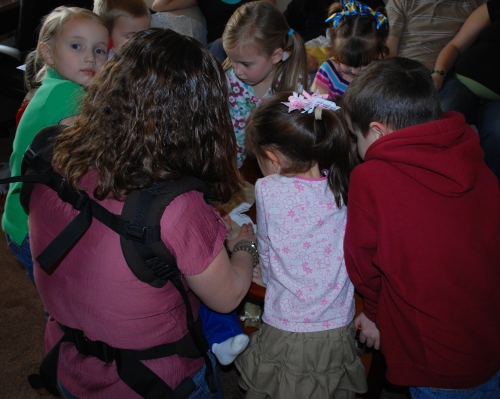 We all gathered around Indy’s Desk, and pieced together the last clue! The background for all the clues, as well as the map that it formed on the backside, was a crumbled up brown paper bag that I flattened back out and glued my printed-out clues onto. I used Elmer’s glue, NOT a glue stick, and it helped to wrinkle and crease the paper even more! It was perfect for that ancient look we were going for. 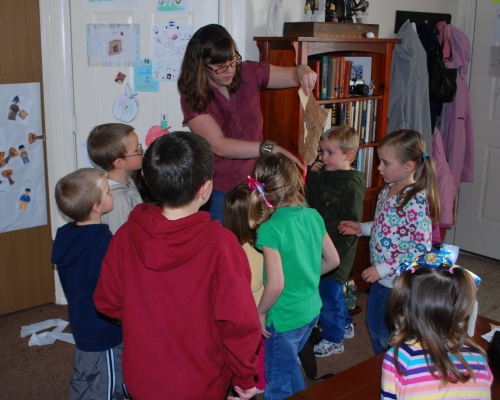 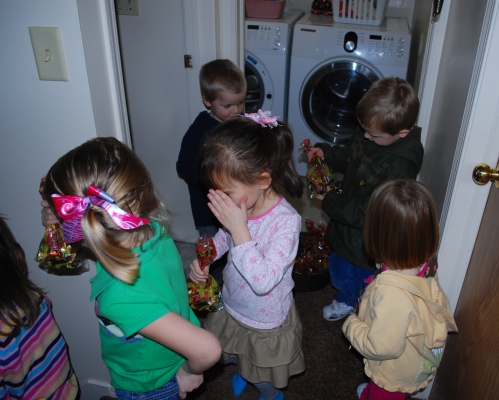 The kid all ran to find the treasure – the goodie bags filled with golden candies/treasures! Cameron caught a lovely photo of Olivia’s attitude. “DON’T take my picture, DAD.” Check out her *teal* socks that supposedly matched her white and pink top, khaki skirt, and gray leggings! We are SO independent! 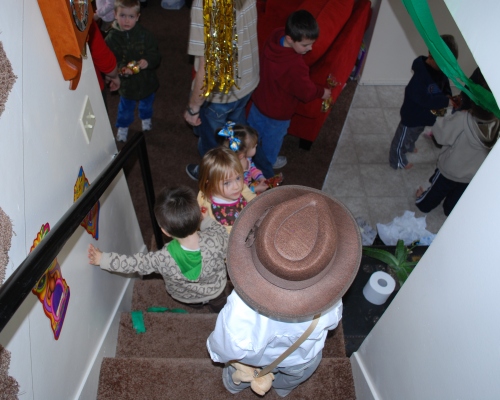 Following Indy back down the stairs. Who needs a satchel when you could have a bear bag? 🙂

Then we opened presents! Present time can get really hectic. To try to bring some organization to the chaos, I try to have all the kids sit about 1-1/2 to 2 feet away from the birthday boy (this is INCREDIBLY difficult to carry out, ha!) and then as he opens his presents, the kids who brought the gift get to come sit next to him and watch him open. Not only does this help the kids feel proud of the gift they brought and special to be up front and involved, it does wonders for helping me remember who brought what after the party is over! 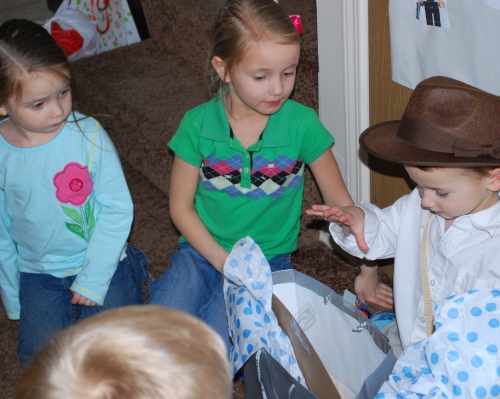 Kyla and Kortney gave Duncan a  basketball hoop and ball for his door. Thanks girls! 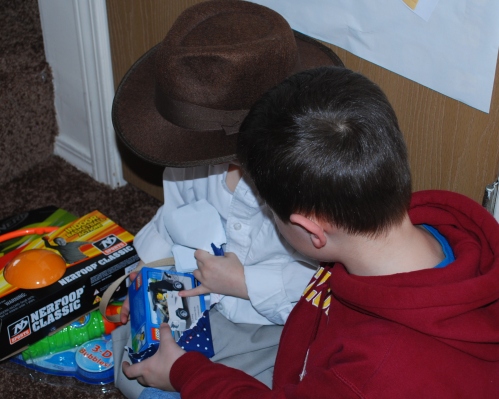 Jordan, Alissa, and Ashlinn gave Duncan a Lego car with a little guy in it! He loves it – apparently he thinks the little guy that came with it is Satipo from Indiana Jones, lol, so he even has a name! Thank you Barbres! 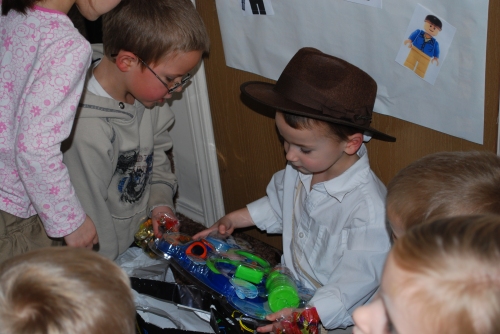 Oops, missed one – here is the gift that Payton and Garrett brought for Duncan – a bubble kit with cool lightning bubbles. I guess when you put the glasses on you can see lightning bolts in the bubbles – Cam and I haven’t tried it but Olivia and Duncan surely enjoy them! Thanks boys! 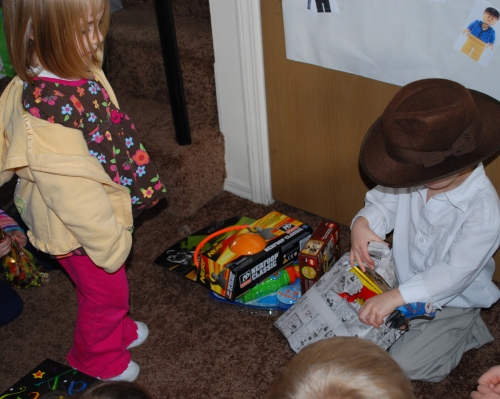 The next gift came from Tasha – she is so cute, she’s from Duncan’s church class – a fellow Sunbeam. Duncan is the oldest in his class because he’s a February birthday – so Tasha was one of the younger ones at the birthday party. Duncan specifically asked for Tasha to come to his birthday party. 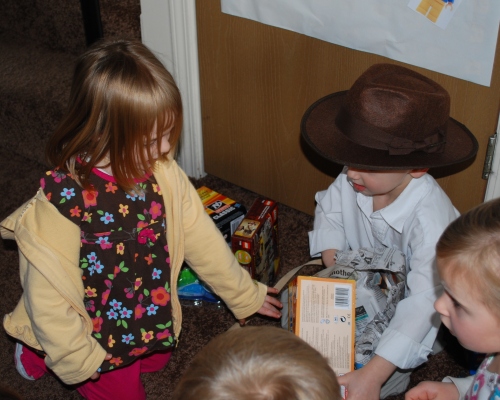 Tasha did finally warm up and sit down as Dunc opened the gift, she was telling him about the dragon and knight that she got for him, she was such a sweetheart. Thanks Tasha! 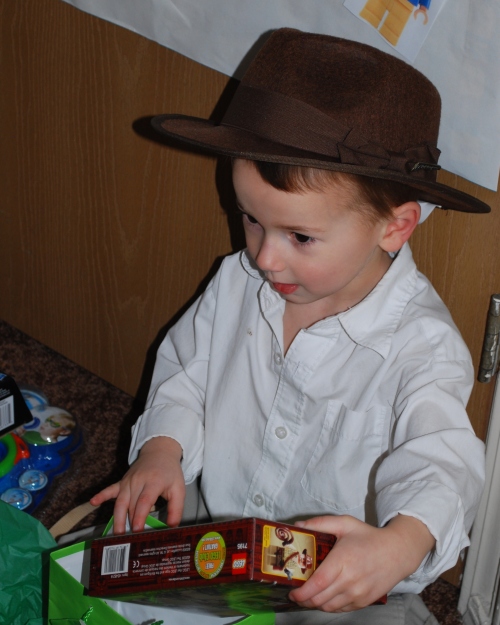 I didn’t get a shot of Zachary, but he brought Duncan an Indiana Jones Lego set! Angela noticed it was the same one that I had given to him and used for his cake, so she asked Duncan after he opened it if he wanted them to take it back and give him a new toy. Duncan said, “No, I just want TWO Indys!” Thank you Olsens! 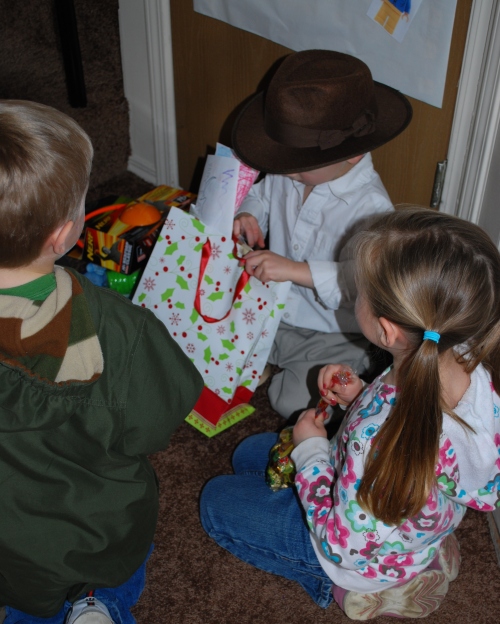 Emma & Michael gave Duncan some cool “army guys with shooters”, Duncan knew what they were right away! And his very own pack of bubblegum, Duncan LOVES gum. Thanks Emma & Michael! 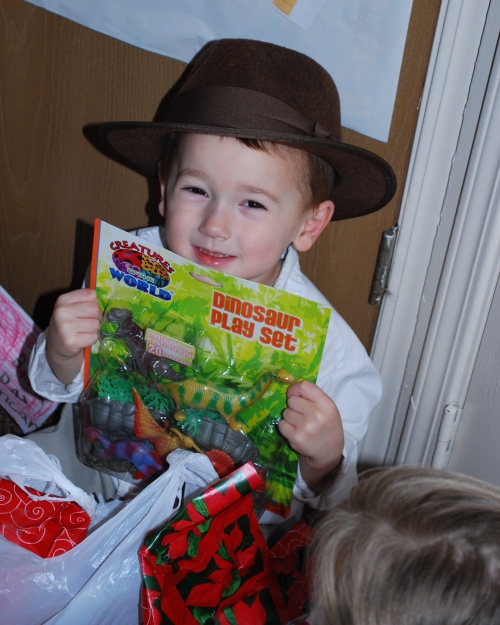 Mimi (Wagner) had to leave early so I made Duncan actually look up and smile at the camera (interesting concept!) so that she could see him with his gifts.  The first was a Dinosaur play set! 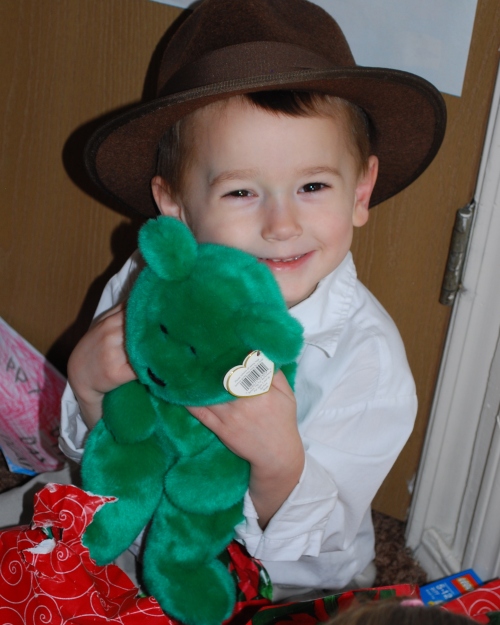 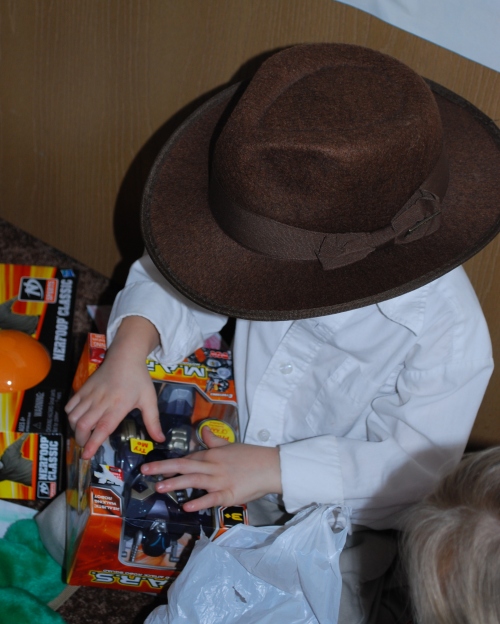 And a robot – I think this was the first gift that was ripped open. He loves this little guy! 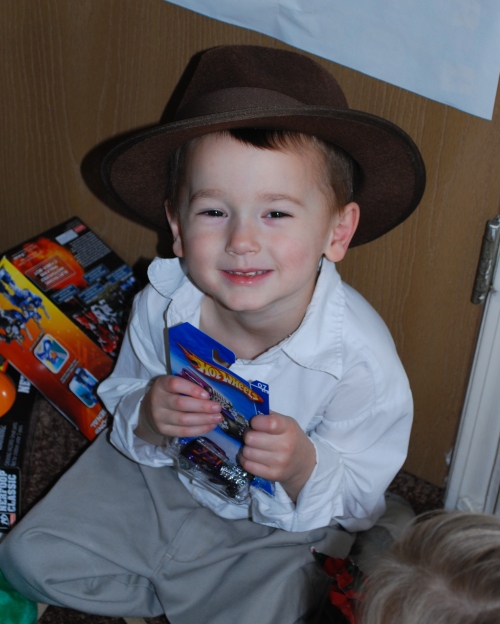 And, a car, of course. Dunc and his cars! Thanks Mimi & Papa! 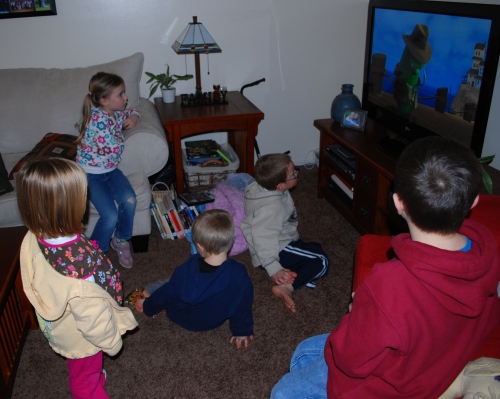 We had about 15 minutes left of the party after everything was said and done, so we sat down and watched Veggie Tales: “Minnesota Cuke” – perfect for an Indiana Jones party!

One thought on “Duncan’s Fourth Birthday!”