And then – it was done! (He’s immensely proud of his creation.) 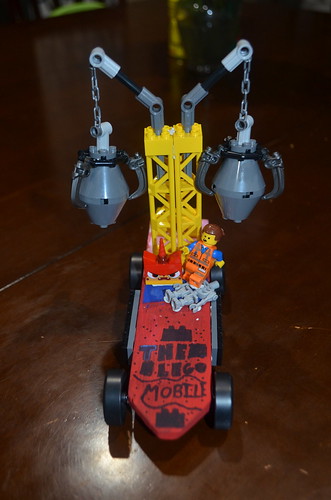 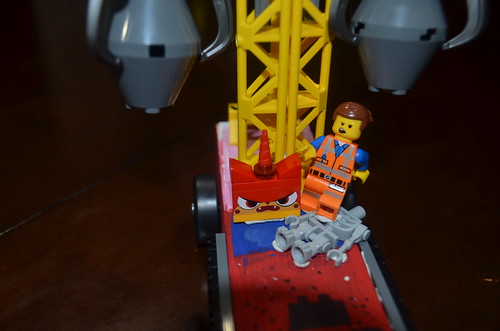 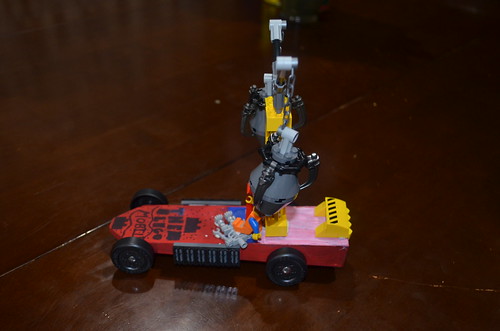 I was a little worried about the drag that the construction towers would make but smiled and left it alone – the important thing about Pinewood Derby that a lot of people seem to miss out on is that it’s for THE BOYS. Not me. Not the Dads. THE BOYS. If he wants Emmett sticky-tacked to his car with towers behind him, that’s what he gets! 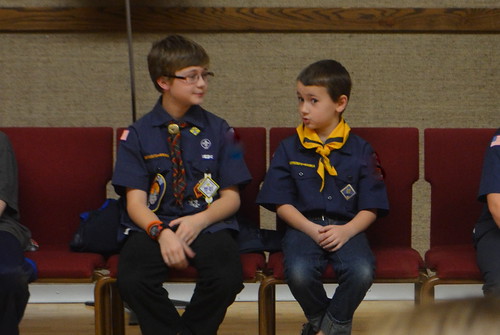 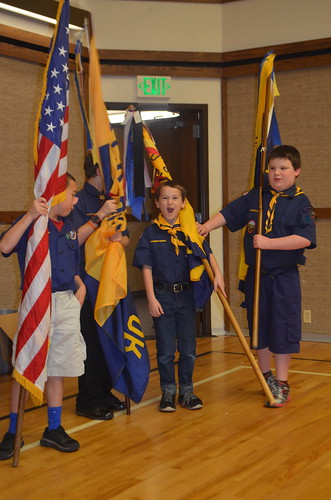 Go Color Guard! He was pretty pumped that he got to be (in? apart of? the?) a member of the (?) Color Guard during this den meeting. Of course, no matter how many times I tried to get a decent photo, this was the face I got. #sigh At least he’s cute, right? 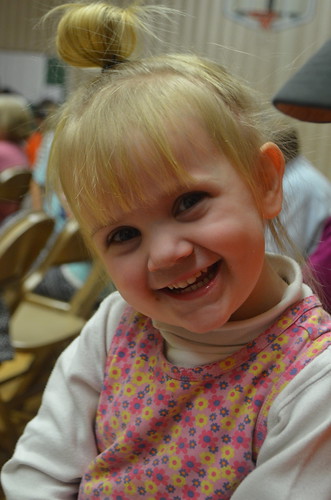 While both the Tween and the Kindergartner abandoned us to watch the races, this little miss stuck around. “Lap? Pick up me? Take picture me, mom!” Repeat. Repeat. Repeat. She’s just a little photogenic. (Her hair was so cute that morning. Then she ripped out her bow. I fixed it before we left but left out the bow hoping to get her to leave it alone. Didn’t work. While trying to fix it AGAIN at the Derby, the rubberband broke. Really?! I pulled an emergency one [huge for her] out of my purse and she was left in a top knot all night. Stinker.) 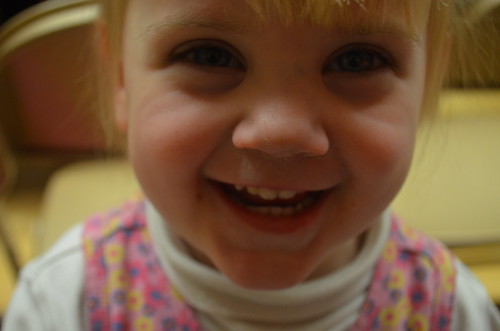 Can you tell she likes to get ALL UP IN YOUR FACE? Apparently, this also applies to my camera lens. You get a nice clear shot of her nose… booger-ed and crusty… because my poor camera couldn’t take that much cute, that close to it, and figure out how to focus all at the same time. 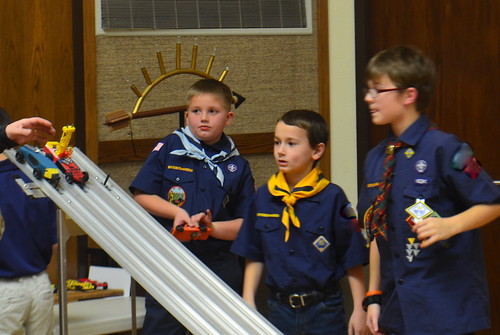 When we got there, Duncan added graphite to his wheels and was weighed in. They suggested he take off the… uhm… wrecking balls? No idea what they were! So he agreed and ended up hot gluing some various metals on top of the car to make up for the weight loss. He was still happy with it, so I was happy with it. 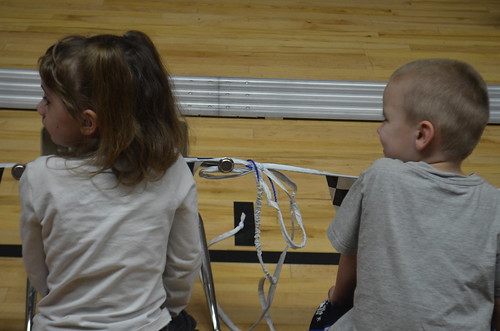 Rachael followed most of the kids right up to the sidelines. She’s sitting with her friend, Michael, here. His older brother was in the race as well. I’m friends with their mom too – it’s always nice to have friends that have kids around the same ages! Although, my friend is lucky – that’s her youngest! I’ve still got a few years ahead of me before my youngest is in Kindergarten! 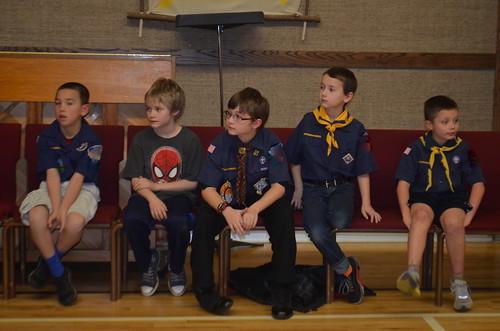 As much fun as it is to watch the boys race their own cars, I think they all enjoyed watching ALL the cars race. Making an event of creating a custom car and then racing it on a cool tall track with a lever that releases them together while a crowd of people stands by oohing, ahhing, and cheering them on? Seriously, I think Cub Scouts might exist JUST for this. 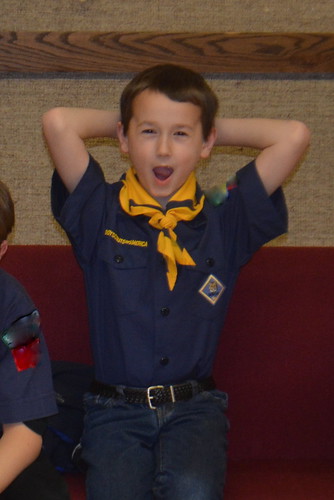 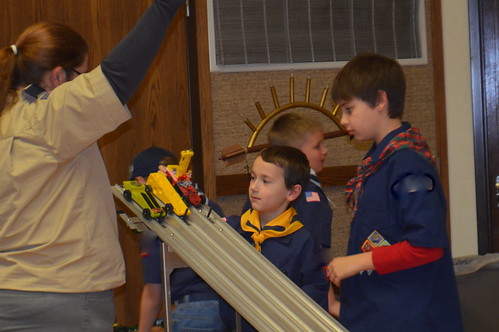 Getting ready for another go. Check out the green car in Lane 1, and the CHEESE in Lane 2. Everyone loved the cheese, every time he finished first, you’d hear “CHEESE!” 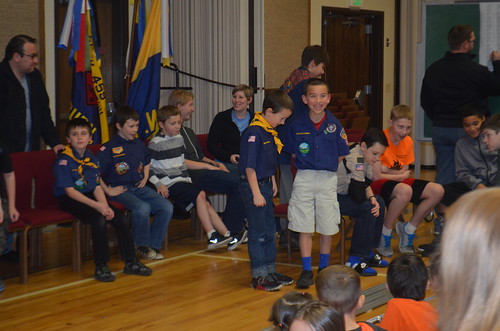 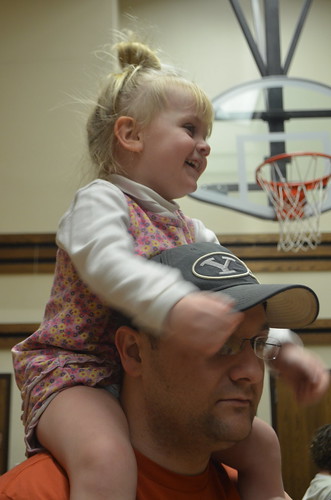 Cameron trying to satiate the PICKUPMEMOM Monster. Side note: This poor guy was home from work today – he actually called in sick. Something he never does usually. But every time he gets sick, he ends up with pneumonia. His chest was already not feeling quite right so he called and went in for an impromptu appointment. Came home with a certified your-life-sucks paper that read: Sinusitis + Asthmatic bronchitis with acute exacerbation. (Except they wrote it in all caps, screamed it at you off the paper. I took the volume down for you guys.) Gotta love tehsick. He’s now recovering with Super Sudafed – the real kind, that apparently you can craft fancy things with – and good ol’ prednisone. And his inhaler of course. On the bright side, the girls… who gave it to him in the first place, (sorry Daddy!) are quickly healing. Chuck has a runny nose still, and all three give off the occasional cough, but it’s definitely letting up.

BROWNIE POINTS ALERT: During his “sick day”, Cameron kept Chuck with him so I could go to my Quilting Society class alone, and even picked up Rachael from school so I could stay the full 3 hours! #dreamboat Does this make me a bad person? 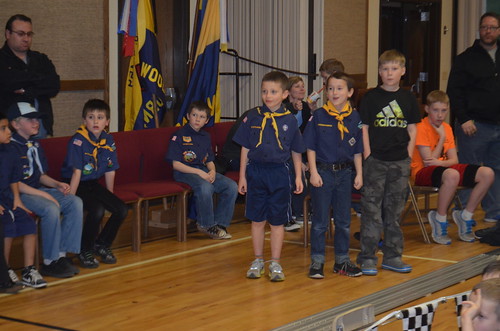 It was a fun night, albeit a little on the long side, and all the poor younger siblings in the crowd were starting to lose it. Or maybe that was just mine? Moaning and sitting, yet getting excited each time a trio took off on the track. Duncan got a “best construction” award for his car (with Lego Movie construction legos – all the awards were punny). All in all, it was a fun night and everyone (sans Mommy) enjoyed a HUGE ice cream sandwich at the end. 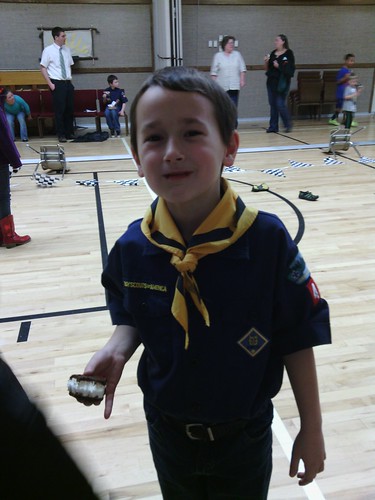 Disclaimer: Excuse the fuzziness on that sweet face, I took this last photo with my phone’s camera (read: HORRID LITTLE BOX THING THAT TAKES ILLEGIBLE PHOTOS AND VIDEO) so I could send it out via text, and it’s not the best. Yet it’s the only one where he has something on his face resembling a smile – go figure!